Start Up Fails When HDD Connected

Thought I’d check the newly-arrived Mosfets (FDC658AP) on my Peak Atlas DCA Pro/75 analyser. It correctly identified the type and the initial curve-tracing results are as expected. Reducing the Vds test range and increasing the Vgs test range would provide a better match to the figure in the device’s datasheet, which has the refinement of showing all values as negative since the device is a P-channel Mosfet (rather than an N-).

Replacing the Mosfet (U24) and the 4u7 cap in the HDD 12V switching circuit has fixed our faulty PVR; it is an ex-faulty PVR. The conclusion, then, is that the likely culprit for any problem embraced by this thread’s title (or something similar, especially if temperature-related) is that 4u7/35V SMD cap. I replaced it with a 4u7/25V conventional electrolytic (there’s never more than 12V across it, so the derating is ok). Remember, I blew-up the Mosfet (still don’t see how) - it wasn't responsible for the original fault.

The details of how the PVR detects a problem with a slow-starting HDD 12V and forces a restart (and why, at other times, such as for scheduled recordings from standby, it’s not bothered) remain a mystery. As does why it boots ok with the HDD disconnected.

I joined this thread at post #67 and we’re now at #122. Sorry about that – but I thought present and future readers would benefit from a blow-by-blow account of fixing this fault.

Removing the HDD supplies' test wires and replacing the SPDIF socket will complete the job for me.

I'm glad you are sorted but it is a saga that most of us hope to avoid and would not attempt!
D

Astonishing stuff and I certainly eye the Newcoppiceman workshop with envy, despite the tragic lack of p-channel power MOSFETs in the spares drawer.

The good news is that anyone who has this symptom in future can stand on @Newcoppiceman's giant shoulders, as replacing the dud cap is within scope for anyone with a suitable soldering iron, even if you can't just nip to the local Maplins for a replacement.

Now the question is, will replacing this 4u7 capacitor fix the faulty unit BH has ?
N

Thanks to /df for his kind words. It’s nice to be able to give something back to the forum as I’ve kept a copy of BH’s Things Every HD/R-Fox T2 Owner Should Know to hand for many years now. I’ve never had to break the seal on our original PVR before but now it’s working again, and we have two spare PVRs, when time allows I’ll investigate the custom firmware I’ve read so much about. At uni (Imperial, ‘76-‘79) I did electronics and electrical engineering; software isn’t really my thing (although back in the day I did write a Pacman programme in machine code for my ZX81) ...so I may have questions.

Although the pinout is the same, inevitably, the replacement SPDIF transmitter was not a direct replacement for the original, so mechanical mods were required (not ideal but, sensibly, the socket is secured to the chassis with its own screw so the lack of mechanical support on the PCB shouldn’t be an issue). Plastic ages, and the original socket’s had become quite brittle (which is why the door fell off).

To explain the third pic: (a) I couldn’t budge the fan connector; (b) desoldering braid cleared two of the holes (Vcc + Vin) ok, but the heavy ground plane prevented it working on the third, so I had to push the solder remnant through with the pin, then use the braid. I was going to drill it out, but my smallest bit is 0.8mm and that was too big (I didn’t want to damage the via).

Stummery said:
Now the question is, will replacing this 4u7 capacitor fix the faulty unit BH has ?
Click to expand...

Dunno, but I will see whether I can replicate these results when I get the chance. I am a little sceptical that the symptoms are identical.

Black Hole said:
I am a little sceptical that the symptoms are identical.
Click to expand...

Yes, my faulty one doesn't totally match either yours or Newcoppiceman's.
Last edited: Jan 15, 2022
W

I have the same issue identified, thanks to Ezra for pointing me to this thread. I have now proven that by disconnecting the HDD, I can get it to boot up normally rather than just rebooting.

I am therefore going to attempt to install the 4u7/25V to see if it rectifies the fault. I had today been searching on line for a 4u7/25V capacitor but get minimal hits, whereas I get loads for 47uF 25V. I have limited knowledge of electronics and wondered if someone could point me at a relevant website with the specific capacitor or another way of searching for it which would bring up more hits.

Many thanks in advance for any advice, I would like to hopefully prove then source and replace the capacitor to help confirm that this is a fix for the problem.
N

Woody17 said:
wondered if someone could point me at a relevant website with the specific capacitor or another way of searching for it which would bring up more hits
Click to expand...

The voltage rating isn't important - as long as it's more than 12V. 4u7 is quite a small value for an electrolytic capacitor so typical ratings are 25/35/50V (higher and they start getting physically bigger). Make sure you put in the replacement the right way round (check my pics) - and ignore the "+" silk screening on the board as this marks the centre of the component's footprint not the polarity. If there's a secure way of sending me your address (can the forum's elders advise?), I can pop a couple in the post from my spares drawer.

Actually, here's something to try; I was going to do this myself, but didn't in the end. Using the can of freezer gave misleading results as it started me on a wild goose chase. If the cap is playing up it will likely behave differently at elevated/reduced temperature - so try putting a cheesehead bolt in the oven (60 degrees C, say), or the freezer, and then hold this in contact with the top surface of the cap and see if there's any difference in behaviour when switching on. Be careful not to drop it on the board!
Last edited: Dec 1, 2021

Newcoppiceman said:
If there's a secure way of sending me your address (can the forum's elders advise?)
Click to expand...

Woody17 said:
I am therefore going to attempt to install the 4u7/25V to see if it rectifies the fault.
Click to expand...

My opinion is that unless you somehow confirm this is likely to be the cause of your particular fault, you will be shooting in the dark... and unless you are reasonably skilled there is a significant risk of making things worse by damage to the PCB.

However, you might consider you have little to lose.
W

The symptoms exactly match what has been described in the thread. As stated the device booted normally after disconnecting both cables to the HDD. I did also try reconnecting the HDD and slightly warming up the capacitor with a hair dryer to see if it would reboot whilst connected, but this didn't work. But did work again straight away once the HDD power was disconnected again.

Overall I have nothing to lose by trying and do realize I might risk damaging the PCB. Given the age of the box I don't see paying out for a repair being something worth funding and even purchasing another 2nd hand unit and swapping the PCB will not fully resolve, as there are many recordings on the HDD recorded in HD, so they wouldn't be decrypted.
OP

Woody17 said:
The symptoms exactly match what has been described in the thread.
Click to expand...

In broad terms maybe, but not necessarily in detail. The unit I have also matches that macro-description, but I do not recognise the issues with the 12V rail – my observations were that the problem only affected the 5V rail.

It seems like the processor shuts down the HDD 5V supply rail if it detects a fault. The actual fault detected might well be different on different units exhibiting this shut-down.

Purchasing a replacement HDR-FOX is a definite possibility – you would swap the HDD into the "new" one, not the PCB into the old one (unless there is significant cosmetic damage on the new one).


Woody17 said:
there are many recordings on the HDD recorded in HD, so they wouldn't be decrypted.
Click to expand...

That's not a problem, we can deal with the encryption once the HDD is in another HDR-FOX (or even by connecting it to a PC).

Good point about swapping the HDD to the replacement unit and I would have certainly gone down the route of the decryption process with either route. I had also considered moving files a FVP 4000 device I have or onto a NAS.

I will also try the repair, as it seems worth seeing if it can be resolved. Worse case I can still offer the damaged unit as suitable for parts use for someone else with other issues.
OP

Woody17 said:
I will also try the repair, as it seems worth seeing if it can be resolved.
Click to expand...

Yes. I was only alerting you to the risks.

Woody17 said:
I have limited knowledge of electronics and wondered if someone could point me at a relevant website with the specific capacitor or another way of searching for it which would bring up more hits.
Click to expand...

4u7 50 Volts will do the job, you can keep the 'legs' long if there is a problems mounting it 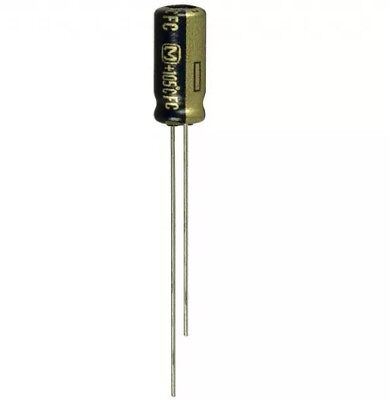 Various values in range between 2u2F to 1800uF. NB 1uF value is Nichicon which is equally as high spec .
www.ebay.co.uk
D

@Woody17 may have found more caps by searching for 4.7uF (where, as obviously no stock management software, or indeed typewriter, could possibly have been expected to handle a 'GREEK SMALL LETTER MU' μ, the industry traditionally writes 'u' instead). The same well known tat bazaar has sellers offering a 10-pack of 4μ7F/25V for £1.50 delivered; the SMD type that is being replaced is much pricier, but not required, as shown above.

ISTR typing up a thesis and manually adding the descenders to make μ when needed.
W

Firstly many thanks to Newcoppiceman for sending me a few 4u7/25V capacitors and some additional comments and guidance on making the repair and confirming that I should read all of the points made in the thread about his fix.

I today removed the old cap, soldered in the new one, plugged it all back together and it worked first time. This is definitely a way to resolve the problem stated, as nothing else has been changed.
OP

Hey guys, I've just discovered another 5 LDOs on the underside of the PCB! What is it with Humax and LDOs??