As mentioned in another thread I've replaced my TV aerial and the result seems strange to me. This is the background.

This picture shows the mid-change situation: 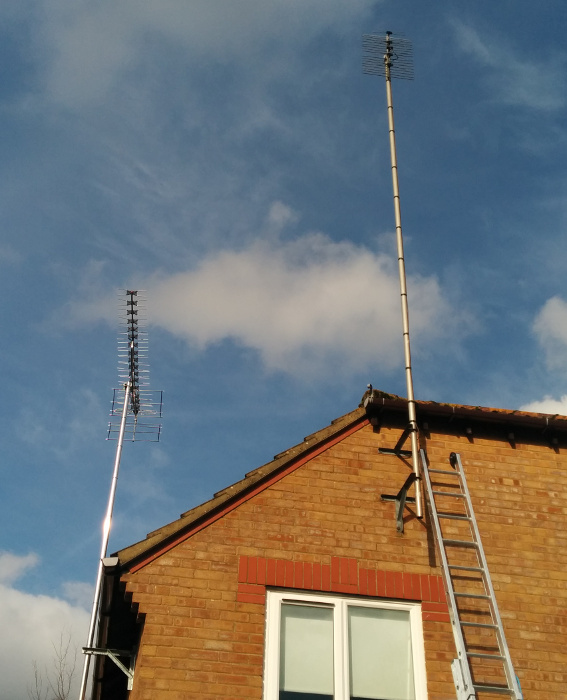 On the right is the old aerial which is a 4-section 'fireguard' type on a 6m pole on the gable end. On the left is the new one which is a more conventional 16-element high gain mounted on a 3.6m pole attached to the side wall. I estimate the new aerial is about 3.5m lower than the old one.

We are using Rowridge (IoW), group A, which although not far away (the official coverage goes many miles past us) is a weak signal because of the geography and tree population. (Come spring time the added foliage may mean I have to extend the pole.)
From the aerial the downlead goes into the loft and to an amplifier/splitter which is powered from a box in the coax next to the TV. This was inherited - I don't know the specs or owt. From the amp a lead runs down to a wall socket in the living room and the amp power box is plugged into this. Out from the box goes into a passive splitter with one leg into each of two Humax FOX T2s. The only changes I've made are to replace the aerial and lead from that to the loft amplifier.

Code:
Now there are a few things here that are odd (to me anyway).
1/ After changing aerials some muxes are getting a better signal and some are worse

?? I can only assume it's to do with the aerial response characteristic, and if it was just the top or bottom muxes that were up/down I'd say that was it. But they are jumbled up.
2/ The later 'new' figures are pretty much all 2% higher. Later in the day/weather? The amp has warmed up having been off for a while? The old pole/aerial was sucking signal away? (I seriously doubt that one!)
3/ Most of these figures were of course mobile and would flick up and down a % or so from the values I've given, as one might expect. The 55-66 however were just that - it displayed 55 for a few seconds, then 66, then 55, etc. I guess this may be a Humax glitch of some sort and perhaps it never displays a value between 55 and 66.

Anyone got any ideas? No prizes I'm afraid

I'd say it's diffraction effects from obstacles en route.
Presumably there was a good reason the old mast was so big.
Why are you changing it anyway? What's wrong with the old one?
The new one looks a lot thinner as well, so extending it might not be a good idea. Are they both made of the same material?
OP

prpr said:
Presumably there was a good reason the old mast was so big.
Click to expand...

Yes, we are in something of a funny area (Hythe/Dibden) with patchy signals. Walking around literally half the aerials point northish (either Millbrook or Hannington I presume) and the rest southish to Rowridge. Most roads have a mix, with alternating N & S as you walk along not unusual. Although we are on higher ground than some we are surrounded by large trees as the estates have been cut into woodland. However, the aerial and mast height I have selected is not dramatically different to several others nearby, so I expect it will be OK.

prpr said:
Why are you changing it anyway? What's wrong with the old one?
Click to expand...

Nothing hugely wrong aside from age/corrosion and a definite curve to the pole (as in bent by the prevailing wind). But we are having a large conservatory built across the back of the house which will make access to that area difficult, so I decided to sidestep any future problems in that respect.

prpr said:
The new one looks a lot thinner as well, so extending it might not be a good idea. Are they both made of the same material?
Click to expand...

It's the heaviest ATV supply - 2" diameter with 2mm wall thickness - and recommended for satellite dishes. I haven't measured it but I think the old one is 2", but no idea on the wall thickness. Both aluminium. From what ATV say I could safely pop another couple of metres on this one without a problem.
You must log in or register to reply here.
Share:
Email Share Link
Top