dandnsmith said:
How does that work - what can you carry on the pallet?
Click to expand...

The only thing I'm not prepared to use it for is a chopping board. Okay, palette.
Last edited: Dec 19, 2018

dandnsmith said:
How does that work - what can you carry on the pallet?
Click to expand...

Not sure, but it sure looks pretty in that colour.
OP

I like the promise of iPadOS 13 (the rebranding of iOS for iPad), but I can't say I'm very pleased with the iPadOS 13.1.2 implementation. It appears the designers have been fixated on users with the large-screen version of the iPad Pro - on the normal size screen the interface is now cluttered and occasionally I have to move the keypad out of the way when previously I didn't. However, that said, the full keypad can now be pinched down to a floating phone-sized keypad occupying less screen area. The home screen icon size & layout can be restored to "normal" (for 10" users) in settings.

People might like the new facility to choose their home screen background, but I have never been a fan of that (even on desktop operating systems). For me, that should be reserved for screensavers, but if you like your workspace icons camouflaged by a busy distracting background of your latest holiday photo, go ahead (on the desktop, I use different plain-colour backgrounds to differentiate between user and admin logins). There's no harm in offering choice, but I wonder why they've decided to play catch-up with something that practically every other operating system has offered since Windows 3.1, after all this time without it?

There are some goodies: the major one so far as I am concerned is that any (updated) app running in iPadOS should now be able to access files on external USB (and NAS I think) drives without using a third-party app to import them first (for which I was using FileExplorer). I have used a cheap Chinese Lightning to USB/SD adapter and browsed a micro-SD card (in an SD adapter) for video files recorded by a GoPro knock-off using Files - and they play!

Highlights (promised, but not all yet explored):
Typically, the new features make some third-party apps redundant. But these things come at a price. Some bugs have been introduced (which might get fixed), and other features downgraded:

I found a log of apps with major/minor/no issues under iPadOS13: 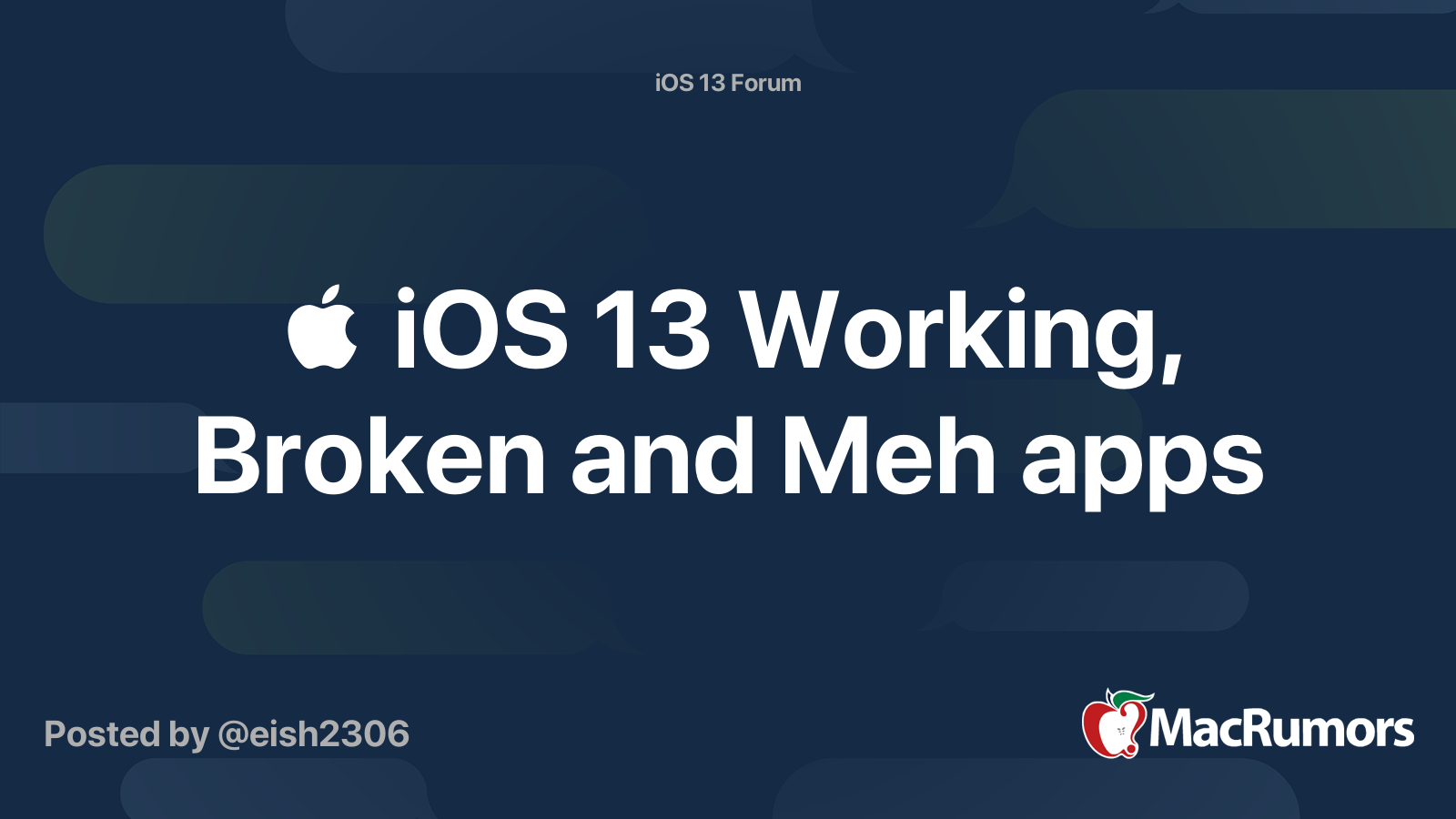 ...but it seems I don't need Dolphin any more, as Safari now requests the desktop site (which is what I used Dolphin for).
OP

Discovered another highlight: taking a screen grab while viewing a web page, and opening the screen grab for editing, gives you the option to use the whole web page instead of just the part on screen. Nice.

I think I might have pinned that one down: it looks like the firmware update reset the display brightness to max.
OP

Black Hole said:
Switching away from and returning to Safari doesn't always preserve the current zoom (even if it was 100%), even if done by home button actions and not swiping.
Click to expand...

Now up to iOS/iPadOS 13.5.1. That "we" issue doesn't seem to be a thing any more, although the auto-correct continues to be almost as bad as it is good (I set an elderly friend up with an iPad recently, and left auto-correct turned off to avoid the confusion it would cause!).

I'm going to use this post to log irritations in the hope that somebody might see it and do something (Apple don't seem to take any notice of bug reports unless they agree they really are bugs - from my perspective they definitely are!). Don't take this as evidence that iOS is crap in the iOS v Android debate - it isn't, and Android is at least as bad.

The quote ' and speech mark " available directly on the keypad (and any keyboard) are non-handed - they stand in as either the start or end mark, but are not the proper typographic quotes and speech marks which are different for start and end. This is easiest to illustrate using a serif font:

These special characters are accessible from the keypad by a long press of the standard key and then glide to the required character on the pop-up (the pop-up disappears if you take your finger off, so grabbing these screen-shots took a bit of dexterity!):

Okay so far... except they are displayed on the pop-up menu in reverse order! For the quotes, the open-quote is third from the left, and the close-quote is second from the left. Ditto speech marks: the open-speech is fourth, and the close-speech is third. What's worse, it's not easy to tell that from the pop-up menu - you only find out once the characters are inserted and you have a good look (assuming you are aware of this and know what you are looking for, but in my experience many people don't have the eye for it).

Note that some languages use the subscript version of the mark to open, and the (English) close or open mark to close. Other languages use «...» (and those are the right way around on the pop-up menu!).

Note that if you are using a word processor with automatic punctuation, it is probably substituting the correct mark for you when you just type ' or ".


2. Apple designers think the world uses their iPads the same way they do

When composing an email on a normal-size (ie not 12.9"!) iPad in landscape, the keypad obscures the completion suggestions for CC or BCC and it is almost impossible to use. I believe this is because "they" think everyone uses an iPad like a phone, ie in portrait, and don't bother to test alternatives. For me, it is not natural to use these things in portrait. Physiologically, we are evolved for landscape - that's why TV is landscape. Video in portrait is like looking through an arrow slit.

The keypad is much smaller in portrait too - that might be OK for the under-30's, but I prefer a larger keypad (and still hit the wrong keys).

This illustrates the problem (although I have had to redact the content):

The suggestions menu can't be moved, and closing the keypad doesn't help: the completion options disappear at the same time (it would make sense to keep it on-screen with the keypad closed, or draggable). The work-around is to flip to portrait temporarily (ugh!), although I can just about get enough room to scroll the suggestions if I first scroll the email up so the CC / BCC line is at the top of the window.

This is why people use real computers rather than these toys